Jannat of 2008 is watchable due to the cricket concept and amazing songs and a better heroine and story! The film makers think that Jannat1 can be tossed stashed or rather crushed with 2 good songs , a new  babe who most of the times reads news headlines when it comes to delivering a heavy dialogue and present the movie afresh and fool the audience. Esha Gupta must be thinking audience will go mad seeing her curves but by now she would have realized there’s no scarcity of curves and shapes  amongst the bollywood heroines! The element of the movie which is more irritating is the another babe oops I mean boy- the lover boy whom we are watching since times immemorial kissing passionately , loving unconditionally every other girl in every other movie. Even if he used to shower the similar romance and love in most of his movies it was a delight to watch him. Once my friend told “jis tarah o toot ke mohabbat karta hai na”- that kind of acting only he can do! But in Jannat 2 our hero himself seems bored of kissing, stereotypic dialogues, passion and romance along with the gunda – gardi and illegal tasks he finishes like in any other movie for instance Jannat1 or Once upon a time in Mumbai where he lives up to his role.  By the way Once upon a time reminds me Randeep Hooda who played police officer even in OUATIM ! He is a fresh edition to the movie along with few others whom you will recognize almost immediately like the other fellow police officer who drives taxi in Jab we met and Emraan’s close friend Balli who killes Jessica in “No one killed Jessica”. Good to see the movie offered roles to the forgotten faces.  At least something good out of all the monotony ! Randeep Hoodas acting and dialogue delivery is simple and nice as always but I can’t say he did some thing new or better acting from what he did prior! Moreover whenever he goes to coin box to listen to the voice mail box of his dead wife, instead of getting emotional I was wishing either the scene ends soon or movie gets better by a sudden twist where his dead wife’s ghost starts talking over phone! Phew man!! I was tired. I hope some director gives him a different role, may be a mafia instead of police officer from next movie or else he will also start getting bored like Emraan Hashmi ! 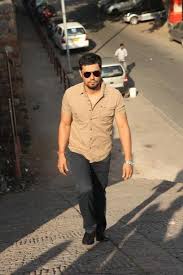 One or two twists in the story were too predictable and so there was no strong suspense element, neither a heart touching scene nor a strong story. After Interval you will start eagerly waiting for the movie to end. Compared to Once upon a time in Mumbai where both Randeep and Emraan acted this movie shuns away as there were no great dialogues! Theres only one chase scene which is little funny!  Atleast they could have mouthed few new “BAD WORDS” other than the Behen chod which the police officer, Mangal singh Tomar(The Bad man), Emraan [a bad man foreever confused whether to do something for greater good or stay bad and flee ]and everybody uses.
Director Kunal Deshmukh and Bhatt should try some other technique to make scenes really hot or sensuous rather than showing Emraan’s or some one else’s almost hidden/blurred half naked butt and a objectionable scene and a bold dialogue which gives a A . It’s a certificate which film makers consider as a degree at times and feel glad about it. A movie with Just a A- certificate and B- Boldness , C – chod word, D- Dirty picturesque  element cant be a hit. It should have other elements too like E – Everlasting dialogues (atleast 2-3), F – Fun and frolic characters who can actually make you laugh, G- Gaane which are unheard of  and many more elements and above all a strong script and story where actors can give their 100%. Only good thing is they shot every thing in Delhi, songs at India gate , Qutub minar , a chase scene in Nizamuddin which may excite the delhittes but not the outsiders . Movie makers used some brain and didn’t spend a lot in foreign locations!

1 star for songs even if the back ground music is a repeat of Jannat as you can never forget the wonderful music so a star in its memory
The other 0.5  to Randeep Hooda and the remaining 0.5 to Emraan just to remind him he can do much much better ! Lastly a funny thought comes to my mind that the director and producer could have done better by announcing some surprise gifts to viewers who can tell the exact number of times “behen chod” and “chutiya” come in the movie! So this is “Jannat” reloaded for you friends. If all your options are closed and all plans get cancelled you can go for this movie if you are a Emraan’s  fan (which I am not but went as that’s the reachable theatre and had nothing to doJ) . You cannot avoid Rahat Fateh ali khan’S TERA DEEDAR HUA and Shafaqat’s TU hi mera
I heard the movie is being edited to make it suitable to telecast on TV.  Leave the vulgar wordings or the single bold scene it holds but will you now watch it if it comes on TV?  I will say you can watch it as there is no need to spend 250 bucks JBas ab yehi mannat hai ki na bane ab aur ye jannat!
Lets meet some other time hopefully with a good movie and better review. Till then Happy Weekend J!