Skip to primary content
Ironically I went to watch this movie on the day which can be circled in the history of India as it was the longest black out due to power grid failure for 2-3 days in july end. I went to the movie on the fly on july 30th night. It was all pitch black and it was like as if I waited and waited for batman to enter and finally went to a near by theatre to meet him(basically to stop my self from sweating profusely and stop mouthing swear words) ! It is a long movie which runs for more than 2 and 1/2 hours but I saw that people were eagerly watching at the screen. They were totally engrossed and so was I . There was pin drop silence in the theatre which added to the effect. 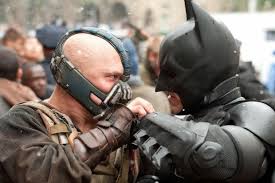 Making this last part of the trilogy must really have been challenging to Christopher Nolan as you all know the JOKER of the dark knight created history, so this time every one was curious to see if the bad man is  as intimidating as Joker or not. For me I couldnt compare both the characters . Bane played by  Tom Hardy  is scary and you really cannot compare Joker and Bane. As half of the movie finishes and Bane has already entered you forget the comparison and get lost in the movie.

To me the primary attraction is the Cat woman played by Anne Hathaway as Selina . She looked real hot in her cat woman attire and looked double sexy when she rides the Bat pod to kill Bane. Some in the theatre hooted in this scene.  Christian Bale is the best bat man. He has that worn out sad look which is so natural when he realises he is losing Gotham to Bane. 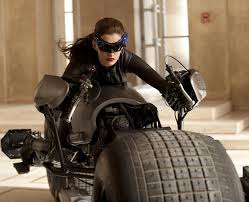 For people who havent watched the prequel the story till then is 8 years after Batman disappears after taking the blame of Harvey Dent‘s murder, people in Gotham live peacefully till Bane enters and aims at destroying the cit y. I havent seen Batman Begins so I got many doubts and got them resolved only after the movie ended.

Praise worthy scenes which make you let out a “aah” / “ooh” are when Bane hits a button and whole foot ball ground is blasted, when Selina drives the bat pod , the jail scene where Bruce finally succeeds to escape and you cannot resist appreciating Batman when his batman hover craft first appears in the dark alley! Other characters worth mentioning are  Inception cast members here – Joseph Gordon-Levitt who plays Robin the police officer who believes in Bruce no matter what, Marion Cotillard  as Miranda who is one of the board members of Wayne enterprises and ofcourse I wont reveal a spoiler here so its good to watch and know it . I personally love Gary Old man as he is the Sirius Black of Harry potter  My personal favourite part of the movie is the prison episode where the exteriors of the prison were shot in Jodhpur (some fort)   chosen because the “forbidding landscape added to the desolation” as per wiki

Some minuses in the movie to me are

1.) The repeated attacks by explosives become boring at some point and the missiles following bat man where he runs away from them even in his well built craft!

2.) The wait is long when you want to see Bat man in action . It seemed like a lot is showed in that span but you may not mind it due to promising actors.

Other than that to me every thing is perfect including the back ground score and batman’s entry. Being Anne hathway’s fan I loved the below picture  and I particularly loved the last scene where Bruce’s Butler Alfred finds Batman which we can easily guess but it led to claps and happiness among audience 🙂

I dont know other technical glitches or loop holes and dont want to dig in to them as I loved the movie and loved it more as it saved me from the power cut wrath. Well I came out of the theatre and it got more dark but the DARK KNIGHT did not come in real 😐 I solaced my self thinking he would have got busy fighting Bane (read grid) some where in a underground sewage !