Talaash has been on my mind since I have been to the show yesterday. I cant say I loved the movie but theres a lot which deserves appreciation in the movie like the way the grimy world of Mumbai is shown very lively even if it is gloomy, dark and mostly shot in the night time. The director and cinematographer Mohanan definitely have put efforts to bring out the best outcome. The opening scene it self is intriguing where a car crashes just after the street dog’s bark which seems like a bad omen. The car crashing in to the sea , the waves and the tension in the passers-by is all shot so amazingly that I was  glued to the screen .Ram sampath’s mystic music started  with opening credits which shows the Mumbai city and happenings in dark hours crisply followed by accident.

Surjan Shekhawat played by Aamir khan is a sturdy role. He is a person who is filled with melancholy and anger due to a personal tragedy and Roshni his wife is also going through the same trauma. Rani mukherjee is so natural in the role that you can feel nothing but sympathy for her.I felt sad when she explains her past to psychiatrist . Am surprised why she accepted a script like Aiyya prior to this. She yet again proved she if provided a good director and story can put all her efforts to bring out the best outcome. Kareena Kapoor aka Rosy the hooker cum prostitute also proved the same. After a disaster like heroine which of course was watchable only due to Kareena , she bloomed like a rose in her character Rosy and looks much more ravishing and steals the show. The intense emotions are displayed so mildly in her acting that she over powers Aamir Khan’s aura in some scenes! Ram sampaths music does justice to the movie. It shows the sad and bad phase of Surjan very aptly . No need to mention that Javed akhtar’s lyrics were just perfect. A loud applause to so many characters in the movie. Tehmur played by Nawazuddin siddiqui the man who is the heart of Wasseypur and also plays the role of merciless officer in Kahaani enters with a new face. He is a limping assistant to a pimp in the red light area named Shashi. Shernaz patel as a creepy neighbor who resembles the Trelawney of Harry potter really scared me. She becomes a source of solace in Roshini’s life much to the anger of Shekhawat who is already fighting his demons and having sleepless nights. At this juncture you draw conclusions in your mind silently , guessing there will be some twist where Aamir’s son helps resolving the case or in a way Shernaz patel may resolve the case but that doesn’t happen leading to lot of guess work.

Armaan Kapoor a super star dies in the car crash and the case becomes more and more complex with he giving away a lump-sum to a local pimp Shashi and Armaan’s friend Sanjay is extremely tensed since the death giving rise to more doubts and conclusions.The first half of the story is flawless and the story line doesn’t disappoint you even in the second half but there will be a sudden  gasp and horror as the movie ends. I personally liked the end. Its definitely not a routine thriller and If I reveal the story you will lose the interest to watch it. I can only say the story line and Kareena Kapoor Khan are the heroes in the movie followed by Aamir and Rani’s realistic performances. The trio have faced tragedies and the way they display it on screen will make you sad for sure. I got skeptical when Rosy narrated about her life by the sea side at her favorite spot to Shekhawat. The music is apt and the strange magnetic force that pulls Shekhawat towards Rosy and lets him blurt out all his worries is so natural and touchy. I loved the scene where she gently strokes troubled Aamir’s forehead. Such a gentle empathetic scene is first time to me in Bollywood. I guessed the twist here but zipped my mouth for  the sake of audience 🙂 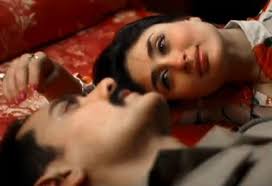 Even if it is inspired here and there by hollywood movies and has minor glitches it stands out to be one of the best thrillers of 2012 along with Kahaani to me. The story is slow paced but enjoyable and you will let out a sigh when Aamir keeps visualising the tragic evening in his mind when he lost his son by imagining all the possible situations which could have saved his son! With such a disturbed mind Aamir reaches a dead end in the case when he bumps in to ravishing Rosy and  to know how the story unfolds you should go and watch it on big screen.

As end credits I want to appreciate Rani , Kareena and Aamir . Would be exciting to watch the trio again in a  movie with great script . The Akhtar trio undoubtedly are talented. If Farhan writes the dialogues , Zoya does the story screen play and Javed does the lyrics. I am starting to like Zoya more and more. Kudos to Reema Kagti for this suspense drama. I am sure not all will like the ending but I liked it as it hampered my guess work and was a total mind blowing end.  Kareena as the most glamorous sex worker since chameli draws attention towards her!If not the end it would have been another Kahaani or a Randeep hooda or Emraan Hashmi flick but ya even Randeep or Emraan would have given a similar performance in the role of melancholic Shekhawat but its the curiosity for Aamir’s ONE movie per year that adds icing on the cake.

The film shows its intentions quite clearly and sticks to its chosen tone and pace. Theres a lot of searching in the movie. Aamir’s search for the criminal , Rani’s quest for happiness, Tehmur’s search for a better life . An extra applause here to Anurag Kashyap for his additional dialogues. Only three words for him,” I love him “. Even if the ending is not so convincing take my word you will be flummoxed and convinced if you rethink as it fits the narration and connects all dots. Its a simple tale of tragedy , loss and revenge.

I loved the below song Muskaanen Jhooti hai ,just and just for Kareena kapoor. Go enjoy the movie but don’t expect it to be logical and if you analyse you are only spoiling the broth!