After so much hullabaloo , I finally watched it yesterday. I was told its truncated so that no scene is hurtful to any. Nothing seemed objectionable to me. Every horror shown in the movie is 100% true . The only objectionable fact is that all that is shown in the movie is a gory fact and not just made up. That is the thing which is unacceptable !I strongly believe even the deleted scenes would not have  been made to derogate any community as such ! Kamal Hassan aka Vishwanath aka Wasim Kashmiri himself is a Muslim .

Like SRK says in My name is Khan , there are only good people and bad people. I am not sure how many really understand this but I felt even Kamal wanted to give the same message in a different style. At no point he mentions that muslims are all terrorists. He himself is a believer who prays regularly and is patriotic enough to be in the RAW team and take risks!

The first half of the movie shows a timid Vishwanath and his wife DR.Nirupama aka Pooja Kumar an oncologist much younger to him who can’t stand him for even a minute. The psychiatrist appointment and Nirupama’s revelation strikes a chord and is very natural and also funny but her dialogue delivery suddenly starts getting irksome and monotonous! The opening Kathak dance number was liked by many which was choreographed by Birju Maharaj . I got bored as it is very lengthy. Andrea Jeremiah is one of the Kathak students who is very close to her master. 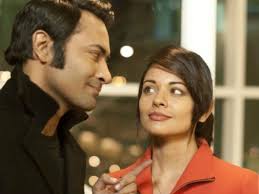 Nirupama who her self is being disloyal to her husband appoints a detective to find out if Kamal is having some secret affair and is guilty but ends up  finding many unexpected secrets about him. She knows so many facts that she becomes breathless!Sanu Varghese’s cinematography is out standing. The Afghanistan’s landscape and people were shot so naturally. I felt Kamal Hasan must have researched a lot on the way of living in Afghanistan and how the beauty of the land was lost in the battle with all non- humans be it Talibans or other U.S. warriors and other locals! He must also have followed many Afghan movies along with Kite runner many times. The Afghan episode is most favorite to me and Kamal pulled off his Al-Qaeeda look with ease though he looked slightly out of place when compared to the real terrorists played by Rahul bose ( Omer) who is the main target of Kamal and Jaideep Ahlawat (Gangs of Wasseypur fame) who plays the role of Omer’s side kick! The other small roles like Mammu , Omer’s wife Khatija , his son and all other Afghanis seemed more than real. My heart goes for all those innocent people who want to lead a normal life there! There is a scene where Osama bin Laden is also shown importantly. It was natural too. I got goose bumps when I thought about the training they go through and the planning they do for successfully performing all the heinous acts.

Shekhar Kapoor and Nassar have done what they have to. Nothing great about their roles but hats off to Kamal Hassan who is rightly tagged as the modern-day Stanislavsky of Tamil cinema. He pulls off any role with ease. Be it the Kathak dancer Vishwanath with a tinge of feminism , be it the Afghan look or the RAW agent look Kamal does it effortlessly. In midst of all this he doesn’t miss to crack you up with his trade mark comic tit bits. The story is good and technical aspects are worth applause. After Dashawataram which actually bored me I felt Vishwaroopam is a good watch.

Not revealing many spoilers but after being on news from long every one has a fair idea of what the story is about. A fight between the real warriors who want to save a country and the terrorists. Kamal wants to destroy Omer’s plans to blow up Newyork with the nuclear (Cesium) bomb and while succeeding in this secret mission he even wins the heart of his wife Niru ! The subtle hints that GOD is one and that people get scared by even a religious identity are all shown in a nice way. Kamal’s vishwaroopam or the real face is unmasked when he and his wife are tortured by the terrorists or the Omer’s group . The real story starts then and it is packed with so much action and thrill that it makes you breathless. The biggest defect is that the movie should have been slightly fast paced specially in the second half. Mentioned below are few brownie points and flaws of the movie!

Lastly Kudos to the team for the brilliant out come . In spite of the minor flaws vishwaroopam takes the cake. It remains one of the very few spy movies in India which are the best. The movie is on par with few Hollywood films. Hoping to see a better part 2

13 thoughts on “Vishwaroopam takes the cake- A good watch”